Founded in 2017, Telelink City has already become a leading innovator in designing solutions for the smart cities of the future. Their main goal is to help city managers use technology to create cities where everyone thrives on innovation. Telelink City’s flexible, fully customizable solutions can be deployed quickly, without specialized support or a large initial investment. They tailor their solutions to the unique challenges of each environment, addressing real problems with efficient, effective solutions.

Telelink City partnered with GoodVision to implement real-time traffic monitoring technology that increased accuracy and decreased costs. Their main concern was the low accuracy of capturing traffic events with their existing solution, which had a significant impact on traffic control and congestion prevention.

An example of the old-school video analytics gating methods used

To compensate for these limitations, Telelink City adapted their algorithm by adding a scaling factor. This was based on some manual counting and calibration for each detector since accuracy varied in each situation. This provisional solution was far from scalable since it was impossible to automate.

Telelink City sought a new solution that increased accuracy without increasing cost. Mladen Zamanov, Smart Solutions Engineer for Telelink City, said, “The field of traffic monitoring has seen many technological advancements, most notably in computer vision and the application of deep-learning models to detect and track objects in images. It was time for us to pursue a state-of-the-art technology solution.”

A transition to real-time traffic monitoring would give Telelink City the improved data they needed, without increasing costs. But real-time technology also offers a host of other benefits that are appealing for smart cities:

Indeed, the potential benefits of real-time traffic monitoring were incredibly appealing to Telelink City, given their focus on supporting the traffic management needs of smart cities.

Stara Zagora Gets a Cutting-Edge Solution

Given these requirements, Telelink City chose GoodVision as their real-time traffic monitoring partner. Initially, the Telelink City team was concerned about the potential unknowns of implementing any new technology and whether GoodVision’s platform would provide the robust data and real-time visibility they needed.

But they were quickly impressed with the flexibility during setup and the additional data they could collect. Furthermore, they found that they could also leverage the GoodVision platform to collect additional data, such as vehicle speed, queue indicators, saturation flows, stopped or delayed vehicles, or traffic gaps. On top of that, GoodVision’s solution provided full multimodal detection of vehicular traffic, bicycles, and pedestrians at once, with the possibility to even extend the set of vehicle types if required.

As a pilot project after technology evaluation in the lab, Telelink City and GoodVision launched a deployment in Stara Zagora, Bulgaria. Among the largest cities in Bulgaria, Stara Zagora has 150,000 residents, 70 buses for public transit, and a city management team of 40. The ultimate goal of the project was to provide an all-in-one mobility system that supported the seamless operation and integration of multiple transit options in the city.

Real-time traffic monitoring played an important role in fulfilling that goal. GoodVision’s solution was connected with the existing city IP cameras (2.0 megapixels, 25FPS). Traffic video analytics are based on GoodVision’s proprietary artificial intelligence, which performs real-time detection, classification, and tracking of traffic attendants based on their appearance and their full trajectories are retrieved for further analysis.

Video analytics run on off-the-shelf EDGE computing units equipped with NVIDIA Jetson Xavier processors. Each unit is capable of processing up to 8 live camera streams simultaneously. The edge unit was integrated with Telelink’s traffic control system via API, providing alerts with a latency below 1 second.

Mladen Zamanov worked closely with the GoodVision team throughout the project. “Even though we weren’t able to work together in person because of the pandemic, the great communication and collaboration between our teams led to a successful realization of this pilot project.” Seamless remote configuration, API implementation, and shipping of pre-installed devices to the team at Telelink City is perfect proof of the modularity and simplicity of GoodVision’s solution. 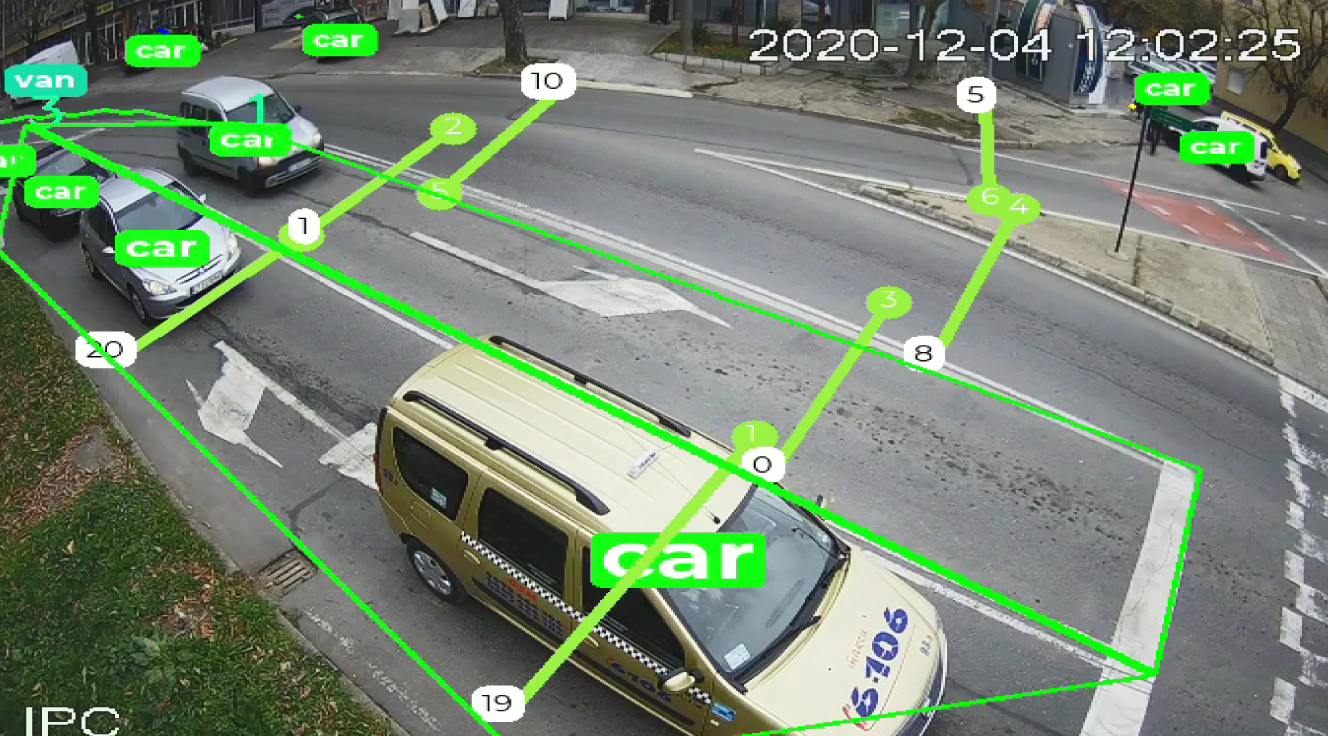 For Telelink City, the outcomes of the partnership with GoodVision have been stellar. Accuracy rates of traffic-event detection quickly jumped from 70-80% to a whopping 97% and beyond. Meanwhile, GoodVision’s state-of-the-art technology also gave Telelink City the ability to capture more data and traffic events needed for their control, and in higher resolution than ever before. This deeper set of high-quality data meant that Telelink City could integrate more data into new traffic-control algorithms.

One of the biggest benefits for Telelink installations is the versatility of the solution, offering deployment on the off-the-shelf EDGE devices or on the servers in the data center, which covers pretty much all the various needs of Telelink customers.

*Speed measurement and classification are possible with a specific setup that further increases the amount of installation work and  cost.

Zamanov noted that there’s still plenty of potential for this partnership. “I do believe that this object detection and tracking technology has countless applications,” he said. Both companies are working together to address Telelink’s customers in Eastern and Central Europe. GoodVision Live Traffic is evolving into a fully integrated traffic monitoring solution in the central Video Insights platform.

Telelink City and GoodVision learned plenty of lessons in Stara Zagora that would benefit other cities. To learn more about how they implemented real-time traffic monitoring, please join us for our upcoming webinar! We’ll explore this project and host a Q&A with industry experts from both companies.

Please contact Daniel Stofan from GoodVision Ltd or Mladen Zamanov from Telelink City if you have inquiries and want to learn more. We also invite you to join GoodVision's webinar with a special guest Telelink City, where we'll speak about the experience with the system implementation and operation.

Deployment of tethered UAV allows us to measure vehicle counts and other important parameters...
Read More

Driving behaviour factors that refer to speed, critical gap or follow-up headway, are the most...
Read More